The community known as Mt. Adar was established 30 years ago on the historical Radar Hill site, where fierce battles took place during Israel’s War of Independence. The Hirbat Nijem archeological site, a fortified building from Persian-Hellenistic and Ottoman times, is located atop the hill where the community was developed. The monument to the Harel Brigade atop Radar Hill, is the most important site here.

The route:
Exit the hotel, turn right at the gate and walk straight ahead for 200 meters
alongside the narrow road that rarely experiences traffic, until it meets up with road from
which Mt. Adar can be seen opposite you. Cross the road carefully, and turn left. Ignore the
turn into the dirt road with the red marker, but turn right instead a few dozen meters farther
along the road, to a dirt path that splits almost immediately, into two separate paths. Walk
along the left-hand path this time, which follows the road to Mt. Adar on its southeastern
side, for about 500 meters, until reaching a number of large wooden statues. A sculpture
group under the tutelage of Sculptor Amir Baumfeld created these interesting works as part
of a process of joint artistic creativity. All the works are based on Old Testament stories, and
the sign at the side of each describes the process, as well as the story upon which each work
is based: “Rachel’s Dream”; “The Tree of Creation”; “Old Testament Stories”; and others.
The path continues to the Mt. Adar entrance gate, a distance of 1.2 kilometers from the hotel
entrance gate.
Continue walking along the Mt. Adar promenade (on the left side of the road). It is a comfortable walk, and the view of the nearby wadis and a number of local villages are impressive. After walking 300 meters or so, you’ll reach a signposted turn to the right, which leads to the Harel Brigade Monument. This large memorial site includes a monument in memory of those killed fighting there, and a display of tanks and armored vehicles. The names of Yitzhak Rabin, who commanded the Harel Brigade during the War of Independence, and that of Uri Ben Ari, who commanded it during the Six-Days War, are among those inscribed at the site. The most prominent on-site feature is a high observation tower by Aryeh and Eldad Sharon, father and son architects, designed as two radar disks standing on two concrete legs.
The view is great from the top of the monument – all the Jerusalem Hills to the East and the
Coastal Plain to the West spread out before you. 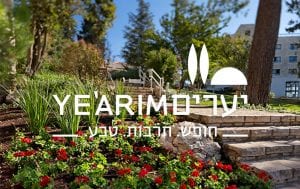